Our planet is changing. So is our journalism. This story is part of a CBC News initiative entitled “Our Changing Planet” to show and explain the effects of climate change. Keep up with the latest news on our Climate and Environment page.

In a forest west of Golden, B.C., Mirjam Barrueto follows a creek bed, heading uphill, her snowshoe-clad feet crunching on the hard crust of months worth of snow.

She’s in search of a booby trap of sorts, configured to snag furtive photos and videos of a mammal some might be afraid to encounter, but that Barrueto, a PhD candidate at the University of Calgary, is eager to discover: the wolverine.

Once widespread across Canada, the range of wolverines has significantly decreased over the past two centuries. Considered regionally extinct in parts of Atlantic Canada, climate change is making things worse for many populations of the animal, both nationally and internationally. The species usually lives in places that have snow for many months of the year.

Wolverines are now listed as “special concern” under Canada’s Species At Risk Act. But Barrueto’s work in southeastern B.C. could help safeguard a population of the species.

And while the images Barrueto’s cameras collect in the forest will help paint a picture of how well wolverines are doing in that area, for her, they also have a charm.

“They have a cute, round face with a pretty impressive jaw and teeth,” she said.

“Sometimes I wish I could hang out with them, but they don’t really want that.”

A climate change refugia in the mountains

Barrueto has visited camera sites in a 50,000 square-kilometre section of southeastern B.C. since 2017; part of an area that science shows will stay cooler with more snow than other parts of the region as the province gets hotter and drier. It’s what’s called a climate change refugia.

“It’s a place where you go for safety,” said Greg Utzig, a forest ecologist and land management consultant based in B.C.’s Kootenay region.

“The climate refugia that I’ve identified for southeastern British Columbia is an area that basically fits in a triangle between Revelstoke, Golden and Mount Robson,” he said.

British Columbia is already feeling the impacts of climate change with last June’s devastating heatwave.  As the province continues to warm, southeastern B.C. will get less precipitation, or will see snowy months become more rainy.

But Utzig notes this triangle of mountains is high enough to stay cooler than similar areas in the region over the next century. Which is important for wolverines, who generally build their dens in snow, and also use it to stash scavenged food, much like a refrigerator.

While a climate refugia may buffer wildlife from some impacts of climate change for now, “these areas are last-ditch efforts … the only thing that is going to resolve these issues is stopping emitting carbon, and leaving fossil fuels in the ground,” said Utzig.

WATCH | It takes a bit of trickery to get wolverines to co-operate for photographs:

A wolverine climbs a run pole to eat bait at a camera trap set up by researcher Mirjam Barrueto in the northern Purcell Mountains, west of Golden, B.C.

Iconic critters in B.C., including grizzly bears, mountain caribou, and wolverines, like these cool, wet environments, said Utzig. And the hope, he explained, is that if we can restore our climate over the coming centuries, the animals can re-disperse from these refuges.

Barrueto’s research aims to figure out how to make that future possible for wolverines.

“If we can keep the population strong here … then we also know that their habitat’s actually going to stick around,” said Barrueto.

The future is female

To know how successful this climate refugia will be for wolverines, Barrueto focuses on the females.

Whether or not female wolverines are having babies — their kits — paints a picture of how likely that population is to survive.

Barrueto is not yet clear exactly what types of disturbances and activities female wolverines can tolerate in this region of B.C. While some of the area she studies falls into parks, much of it is home to towns, the logging industry, recreation like backcountry skiing, or used by humans in other ways.

“At what point [are] there too [many] of us that even if there is enough food, [wolverines are] not going to stick around?” said Barrueto.

For this climate-safe haven to benefit wolverines in the future, the population has to be healthy now. So Barrueto wants to assess what human activity females can tolerate while still reproducing — research she hopes could support decisions about how to manage the area moving forward.

But it takes time and a bit of trickery to get wolverines to co-operate.

At the top of the hill, nestled in the inland temperate rainforest of western hemlock and red cedar trees, Barrueto reaches her field site.

She gestures to a wooden contraption affixed to a tree, and two beaver skulls  — bait from the previous year — dangling from a metal cord.

This bait is the reward for a wolverine willing to clamber up the tree to the wooden contraption, a plank projecting from the tree called a run pole.  At the end of a plank is a wooden frame a wolverine can lean on as it stands up to eat the bait.

This year, Barrueto has hiked in a new treat: a cattle femur.

“These are the things I don’t tell my neighbours,” she said, unwrapping the bone.

At the base of a nearby tree she digs through the snow to find her motion-sensitive camera, which is designed to start snapping photos when a wolverine is near. Images that show the wolverine’s belly let Barrueto identify the sex. And, if it’s female, whether or not it’s pregnant or has recently had kits.

Wolverines also have patterns on their chest which are distinct, like fingerprints, allowing scientists to identify individuals.

It took wildlife biologist Audrey Magoun two years of studying captive wolverines in Oregon to develop the technique that would require the animals to expose their unique chest pattern. She’s been researching the animals for more than 40 years, and notes there are still unknowns about the species and how it will respond to a warmer world.

“I think the story around wolverines is a lot more complicated than what we realized,” said Magoun.

In Canada, wolverines can be found in the Arctic, and from British Columbia to Ontario — just a portion of the area where the species used to live.

“They’ve lost a lot of their range,” said Jason Fisher, a wildlife ecologist with the ACME Research Group with the University of Victoria’s School of Environmental Studies. Fisher explains they used to range all the way through Quebec and Labrador and even into the Maritimes, and then far south of the Great Lakes.

Causes of the decline include trapping and hunting, along with changes to the habitats where wolverines live, such as forestry, oil and gas exploration, roads and other development. Human-caused climate change is also playing a role, but piecing apart exactly how can be difficult.

In Canada, research in the Rocky Mountain national parks, where there is less development than in unprotected areas, has shown that even there, populations are diminishing.

“That suggests that the signal of climate change is very real and that life is being made more difficult for wolverines, whether that’s just the loss of snow or the loss of available food resources, or probably a combination of both,” said Fisher.

Compared to immediate threats like the destruction of habitat, “climate change is a chronic, persistent threat,” he said.

Hope for the future

As Canada experiences warmer temperatures and less consistent snowfall, Magoun thinks we should keep in mind not only temperature, but ways wolverines can avoid overheating — access to water, shade, and lower nighttime temperatures.

Another consideration is connecting disparate populations. Fisher looks to the U.S., where some wolverines live in patches of snow-covered mountains and are “crossing valley bottoms that are heavily developed, that are covered in highways,” he said. “Those snowy patches are just going to get smaller and farther apart with climate change over the next century.”

He said overpasses so wildlife can make it across highways, and leaving green space to connect these “remnant” populations is key to their future in a warming world.

“Wolverines were here long before us. We have a moral obligation and as well as a legal mandate to maintain wolverines … in the places that they have historically lived,” said Fisher.

If wolverines can thrive in the triangle between Golden, Revelstoke and Mt. Robson, it would bode well for their future in that region. So Barrueto will keep baiting them, and studying the images and videos she captures, hoping to find a balance of how wolverines, people and industry can all survive there.

Written and produced by Molly Segal.

3 US Lakes That Are Drying Up

Fri Aug 5 , 2022
There are numerous lakes all over the world which are drying up. It is a big downside, as a result of not solely does it have an effect on the setting, however it additionally impacts the folks and animals that depend on the lake for his or her livelihood or […] 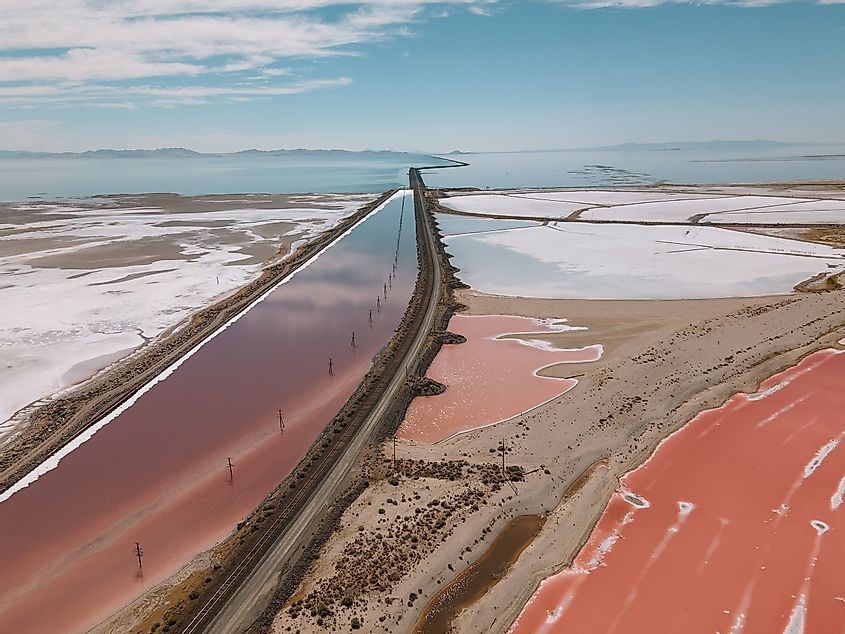